My preferred translation of this Russian title is To the Stars, the Hard Ways*. Watch it with English subs here. 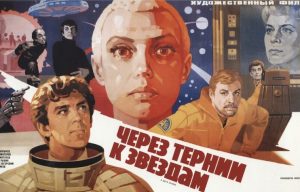 ‘The action of this film, *whose Latin title translates as Through the Thorns to the Stars, is based on a screenplay by cult Soviet sci-fi writer Kir Bulychev and is set in deep space and on fictional planets. A reconnaissance craft — named Pushkin in homage to Russia’s greatest poet — encounters a derelict starship. Inside is a humanoid woman with inhuman abilities — teleportation, telekinesis, and so forth.

Richard Viktorov directed the original 1981 version of this film. He died soon afterwards in 1983 while shooting The Comet, another sci-fi movie. Richard’s son, Nikolai Viktorov, released a new version of the film in 2015, having remastered the sound and special effects and shortened the running time by cutting several set pieces laced with Soviet ideology.’

Posted in Home Page, Things I am into