The excuse was UoC Institute of the Arts education of the minds of others, the host was a possibly frazzled Will Cooper. Thank you to an exhausted GoMA for a terrifying, hilarious yet ultimately edifying insight into curatorial life.

Starting from the top – hit it!

Polygraphs is a group exhibition, centred around Abstract by Hito Steyerl, which explores truth, fiction and evidence in a complicated world.  Artists are often witness to a changing global environment and their role within that is to document, ask questions and create layers of meaning to engage audiences with current international discourses. 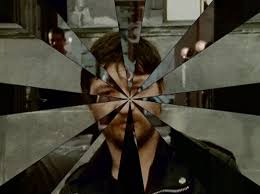 Stephen Sutcliffe: Work from the Collection is a solo exhibition by the Glasgow-based artist Stephen Sutcliffe. Glasgow Museums recently purchased five works by Sutcliffe for the City’s collection and this is the first time the films, photographs and wall drawings will be exhibited in GoMA. We are delighted that Sutcliffe has lent us two further works to mark his first solo show at the gallery, which follows major commissions for the Manchester Art Festival and Edinburgh Art Festival this year.

Sutcliffe’s work draws upon an extensive personal archive of broadcast material and printed ephemera that he has collected over a number of years. He is interested in the use of the archive and his collection also includes the New Yorker, where he takes inspiration from the cartoons of Saul Steinberg, amongst others, for his wall drawings and photographs.

In his films recordings from television, cinema and radio are edited together to make poetic new works that focus on anxiety, self-doubt and the creative process. His careful editing of sound and image creates an awkwardness or interruption, which is often humorous at first glance, but can become quite dark and satirical, revealing an interest in the subversion of dominant narratives about communication, power and class.

Despair (2009), Plum (2012), Come to the Edge (2003), No (After Steinberg) (2011) and Untitled Wall Drawing Selected Errors (2011) were purchased for Glasgow Museums using the Contemporary Art Fund with assistance from the National Fund for Acquisitions (NFA) and the Art Fund​.

TASTE! is an exhibition of artworks from Glasgow Museums’ collection displayed alongside material from our archive, exploring how collections are built, artworks are commissioned, and exhibitions are organised. By hanging artwork and archive together, TASTE! suggests that object and idea are of equal importance and offers the exhibition as a space to enjoy, question and discuss the value of art.

Few things can cause controversy in the way that contemporary art can. From unmade beds to piles of bricks, the objects, processes and concepts behind modern and contemporary art are undoubtedly challenging. Since opening its doors in 1996, GoMA has, like the work its shown, sometimes been a controversial place. Once notorious for not including artists emerging from Glasgow in the early to mid-90s in favour of popular, figurative artworks, much of what has been shown here has divided opinion.  Now GoMA can pride itself on being a forward thinking, progressive collecting institution with one of the strongest and most diverse collections of Contemporary Art in the UK, holding a wide range of works from cutting edge performance art to internationally significant photography and video.

This exhibition will, for the first time, place works together to create a snapshot of our collecting history, with some never before seen archive material expanding on GoMA’s rich history.

Marlie Mul: This exhibition is cancelled