Popped in with the UoCIoA students – thanks to Will Cooper.  Hit it at the rubber point. 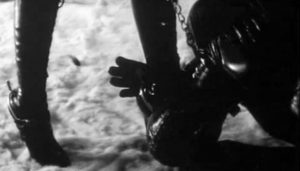 from The Third Eye Magazine

‘1975–1983’ presents the complete works of enigmatic Scottish filmmaker, John Samson (1946–2004). This is the first museum exhibition of the five films Samson made during his lifetime.
A worker on the Clyde shipyards, as a teenager Samson was involved in various protest movements. He was a spokesperson for Glasgow shipyard apprentices and in 1961 was arrested at the Holy Loch for participation in a Committee of 100 anti-nuclear action. In 1963, after meeting his partner Linda, then studying painting at The Glasgow School of Art, Samson fell in with a bohemian circle including artists, writers and musicians. He taught himself guitar, took up photography, and by the mid-70s began the cycle of films featured in this exhibition.
Samson’s working class roots, his passionate interest in radical politics, art and bohemia, compelled him towards individuals and groups operating at the margins of society. Covering topics such as tattooing, amateur railway enthusiasm, clothing fetishism, professional darts and the sex lives of disabled people, Samson’s films are concerned with cultural outsiders. Despite courting controversy, he was always compassionate in his curiosity. Samson’s work is about allowing unusual people to speak for themselves; carefully observing – but not judging – their conspicuous lives.
‘1975–1983’ comprises all five of Samson’s films: Tattoo (1975), Dressing for Pleasure (1977), Britannia (1978), Arrows (1979) and The Skin Horse (1983). It also features a commissioned graphic project by Stockholm-based designers Martin Falck and Alexey Layfurov.
Tattoo (1975) A documentary film based on the art of tattooing, tattoo artists and their clients, with interviews exploring the fascination for, and the reasons behind, choosing to be tattooed. The film builds up to long climactic scene, often since replicated in other films on the subject, featuring tattooed bodies displayed as art objects. Typical of his involvement in his projects, Samson had himself tattooed during the making of the film.
Dressing for Pleasure (1977) explores the subject of fetishism in clothing. The film, which, despite its subject matter, remains playful and light, features cameos from Malcolm McLaren and punk icon Jordan, as well as a host of other curious characters.
Britannia (1978) A group of volunteers work on the restoration of an old locomotive. This unashamedly poetic piece draws strongly on the theme of resurrection as Britannia rises like a phoenix from the ashes of its desolate resting place.
Arrows (1979) is a film about Eric Bristow and the world of competitive darts. In Bristow, already successful and self-assured in his early 20s, Samson finds a compelling figure through which he explores a sport as well as a specific period of British social life and culture.
The Skin Horse (1983) is a ground-breaking a film about sex and disability that won Samson much acclaim. An exploration of body image and identity,
The Skin Horse pulls no punches and remains as powerful as ever.
From GoMA’s website
Posted in Items of note