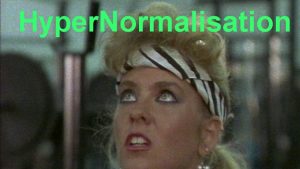 HyperNormalisation tells the extraordinary story of how we got to this strange time of great uncertainty and confusion – where those who are supposed to be in power are paralysed – and have no idea what to do. And, where events keep happening that seem inexplicable and out of control – from Donald Trump to Brexit, the War in Syria, the endless migrant crisis, and random bomb attacks. It explains not only why these chaotic events are happening – but also why we, and our politicians, cannot understand them.

The film shows that what has happened is that all of us in the West – not just the politicians and the journalists and the experts, but we ourselves – have retreated into a simplified, and often completely fake version of the world. But because it is all around us, we accept it as normal.

HyperNormalisation has been made specifically for BBC iPlayer. It tells an epic narrative spanning 40 years, with an extraordinary cast of characters. They include the Assad dynasty, Donald Trump, Henry Kissinger, Patti Smith, the early performance artists in New York, President Putin, intelligent machines, Japanese gangsters, suicide bombers – and the extraordinary untold story of the rise, fall, rise again, and finally the assassination of Colonel Gaddafi.

All these stories are woven together to show how today’s fake and hollow world was created. Part of it was done by those in power – politicians, financiers and technological utopians. Rather than face up to the real complexities of the world, they retreated. And instead constructed a simpler version of the world in order to hang onto power.

But it wasn’t just those in power. The film shows how this strange world was built by all of us. We all went along with it because the simplicity was reassuring. And that included the left and the radicals who thought they were attacking the system. The film reveals how they too retreated into this make-believe world – which is why their opposition today has no effect, and nothing ever changes.

Victoria Jaye, Head of TV content, BBC iPlayer says: ““Adam is a brilliant storyteller and film maker, who has taken full creative advantage of BBC iPlayer to produce ambitious, groundbreaking new work. HyperNormalisation is both timely and important and builds on the huge success of Bitter Lake which attracted over 1.8 million requests to the platform. So far this year, iPlayer first titles have attracted over 75 million requests, which is a significant contribution from a select few titles and we expect to see this rise as we look to premiere more and more content on the service.”

Adam Curtis says: “BBC iPlayer offers an extraordinary place to experiment and to tell stories that allow you to explore and explain the strangeness of our modern world in a new way. Complex, interwoven stories that reflect the new complexity and unpredictability of our time.”

HyperNormalisation builds on the success of Bitter Lake, Adam Curtis’ first iPlayer commission and The Rack Pack, which attracted over 1.2m requests on iPlayer before being broadcast on BBC Two. – from the beeb website.

Posted in Items of note